Winter solstice is upon us, it’s a magnificent time of year in Mozambique. The stars are bright, sparkling diamonds that light up the ink black sky and when the moon is full there is not a more breathtaking sight. The nights are much colder and so is the sea but the beaches and the colours of the archipelago is a masterpiece of nature. 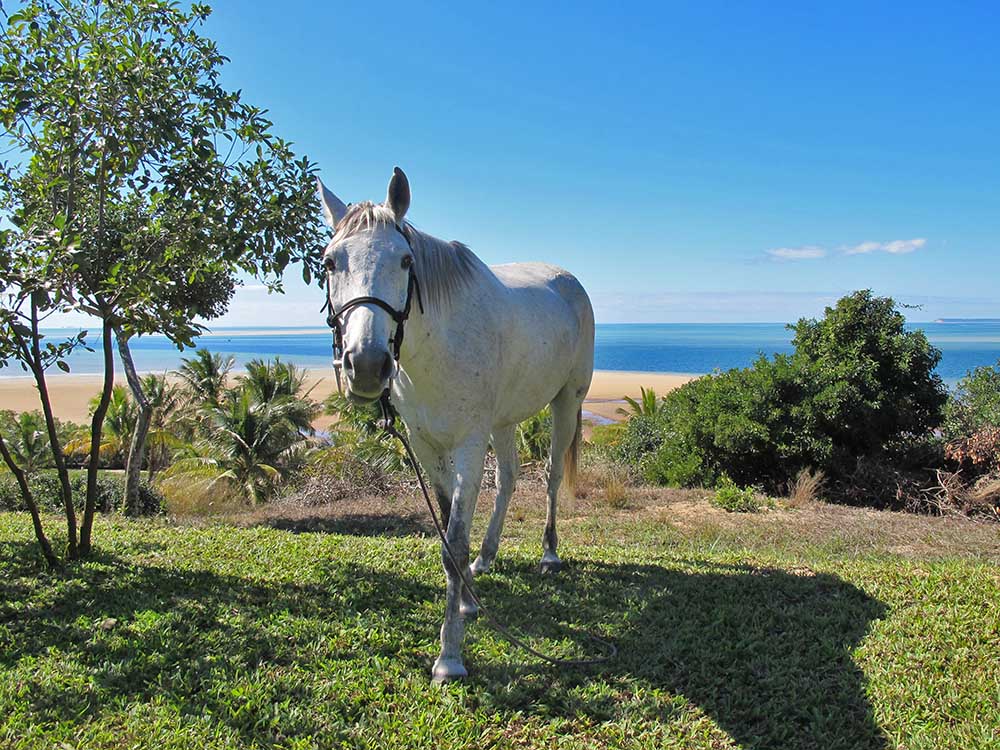 How privileged we are to live in this beautiful part of Africa. The whales will be coming soon with their babies, there is nothing more special than watching these gentle giants rolling around in the vast ocean.

Today we will talk of new horses, yoga & hear all about a day in the life of a volunteer. If you haven’t done so yet, make sure to have a look at our promotional video.

Several weeks ago we took on four gorgeous horses from a lovely family in Chemba, Mozambique. Their children were schooling abroad and the horses were not being ridden as much, so they were looking to rehome them and we were absolutely thrilled to take them on. The horses are Rasheed, Sarana, Cadenza & Allessia. 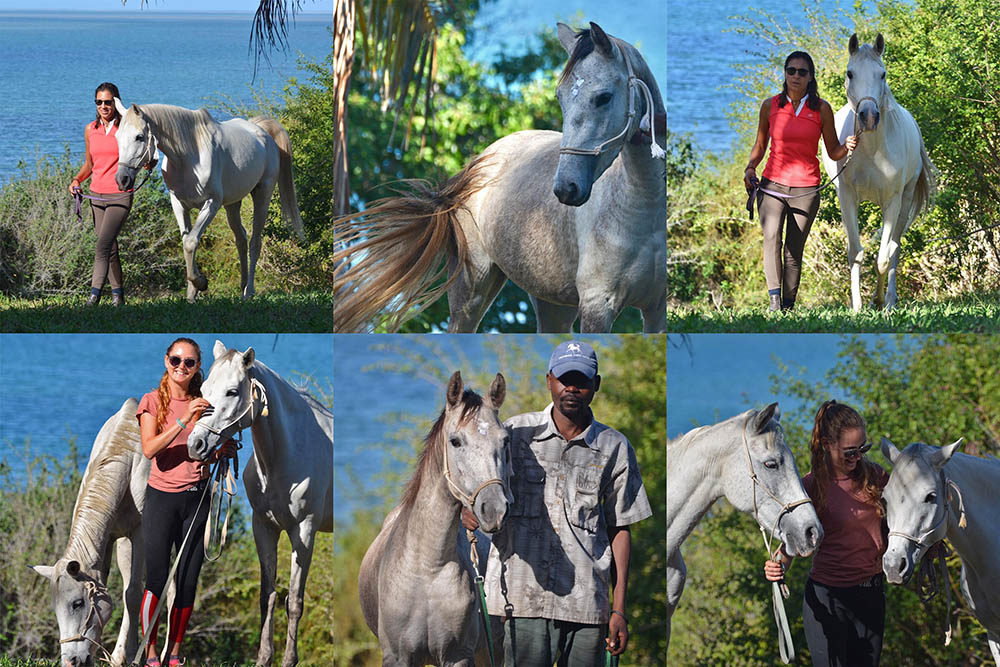 All the horses are greys with Rasheed, Sarana & Cadenza being from the same family. Rasheed is the oldest, a majestic lady well into her 20’s, dam to Sarana, and granddam to Cadenza. Breeding is mainly Arab with a mix of Boerperd and Cadenza’s sire is a warmblood.

The youngest is Allessia, a 3 year old Basuto pony the family got when importing cattle from South Africa to Mozambique during our terrible drought. The farmer pleaded with the family take the young filly with the cattle as her mother had just died and conditions were difficult. We have always been fascinated with the Basuto pony, they are known to be very hardy and sure-footed; in the Boer War they were the favourite of many soldiers and used extensively which nearly caused their demise.

They are still in quarantine separated from our main herd but we will be looking to join them up in the next month or so and we will keep you updated on their progression.

A highlight of June has been our volunteer Elizabeth arriving with her riding hat in one hand and a yoga mat in the other. I hate any form of exercise other than riding and walking. Watching Elizabeth bend her leg round her neck made me wince but she extolled the virtues of yoga at breakfast and was determined to recruit a class for early morning yoga sessions. 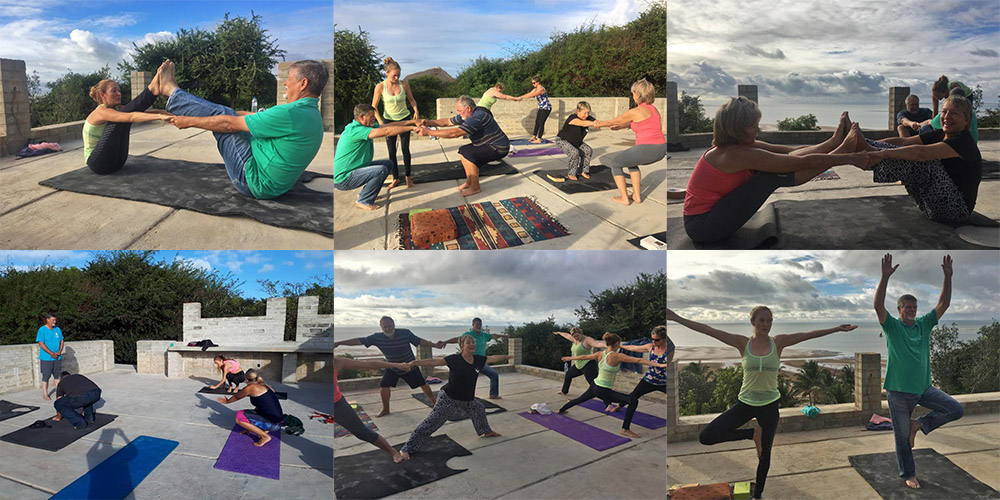 Pat to my surprise took a great interest and enthusiastically agreed to us all having a class at the stables. He felt if we became supple we could leap in the saddle without staggering on to the mounting block. I was eventually convinced and we gathered together in the early morning light while Elizabeth patiently explained a torturous routine. We lay on our backs, legs and toe in the air and then had to extend our leg to our forehead. For those who could not quite get their leg near their head Elizabeth supplied horse lead ropes which we hung over our feet to help pull our legs up. It was agony, I can’t lie, but you could not have a more attentive teacher.

As I lay on my back groaning Pat would soldier on. As we were the oldest in the class I think Pat felt we must prove we still had it in us. My best part was the end bit. You lie on your mat with your eyes closed and Elizabeth dabbed some essential oil on your temples and then gave your feet a quick massage. She would play music and you would drift away. Our next thing is meditation. Namaste

Day in the Life of a Volunteer

Waking up at 5.30 am is never a chore at Mozambique Horse Safari. My day begins with a dreamy commute: down the steps from our charming beach resort, across the grass beneath the coconut palms, followed by a gentle stroll along the beach, listening to the calm waves and just in time to catch sight of the magnificent sunrise.

At the stables, around 40 adorable horses are also ready to start their day. I help with feeding and hoof-picking before getting to work with some of our younger geldings and mares who need plenty of handling, brushing, tail-washing as part of their 300-hour training programme. 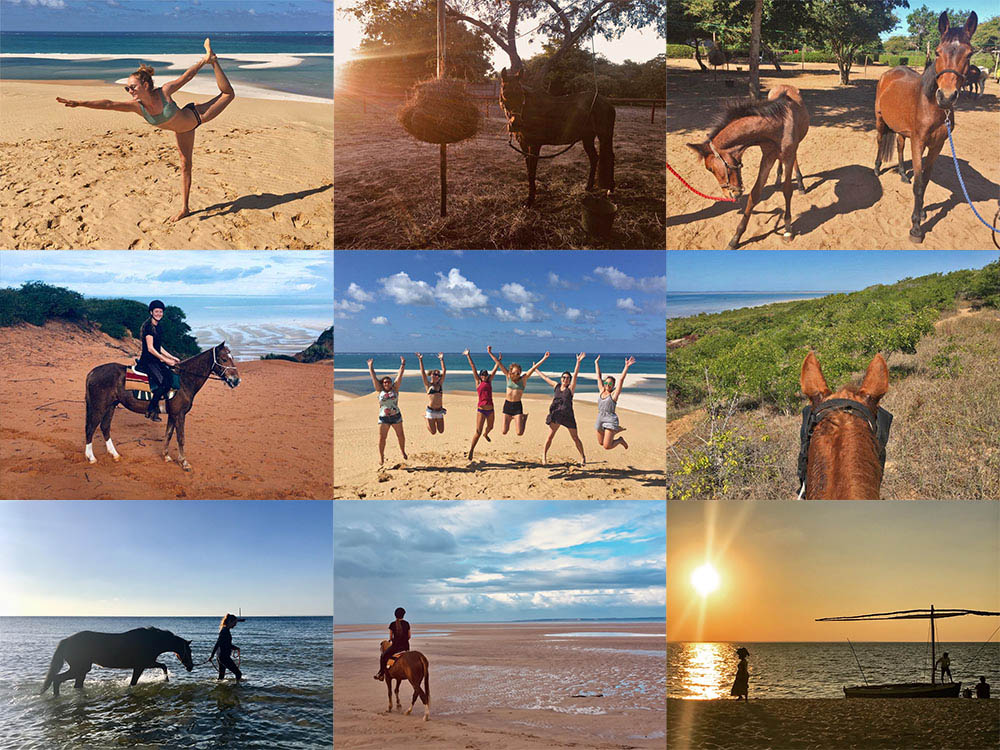 Some of Elizabeth’s pictures from her time in Vilankulo

Then it’s time for a delicious, multi-course breakfast at Pat and Mandy’s house, after which a beach ride is usually on the agenda. Cantering along the shore, I pass by anchored dhow boats, local fishermen and women carrying buckets on their heads — a reminder that I’m in Africa. At a walk, I just can’t get enough of gazing out  at the glistening, aqua sea, striped with golden sand banks. It’s quite unlike anywhere I’ve visited before.

In the evenings, we volunteers might wind down with a sundowner, before heading back to Pat and Mandy’s for supper. By 8.30pm I’m exhausted, ready for a shower and bed, and all new adventures that await me the following day.

Every newsletter we like to try and to put together a few striking pictures portraying the colours of Mozambique Horse Safari. 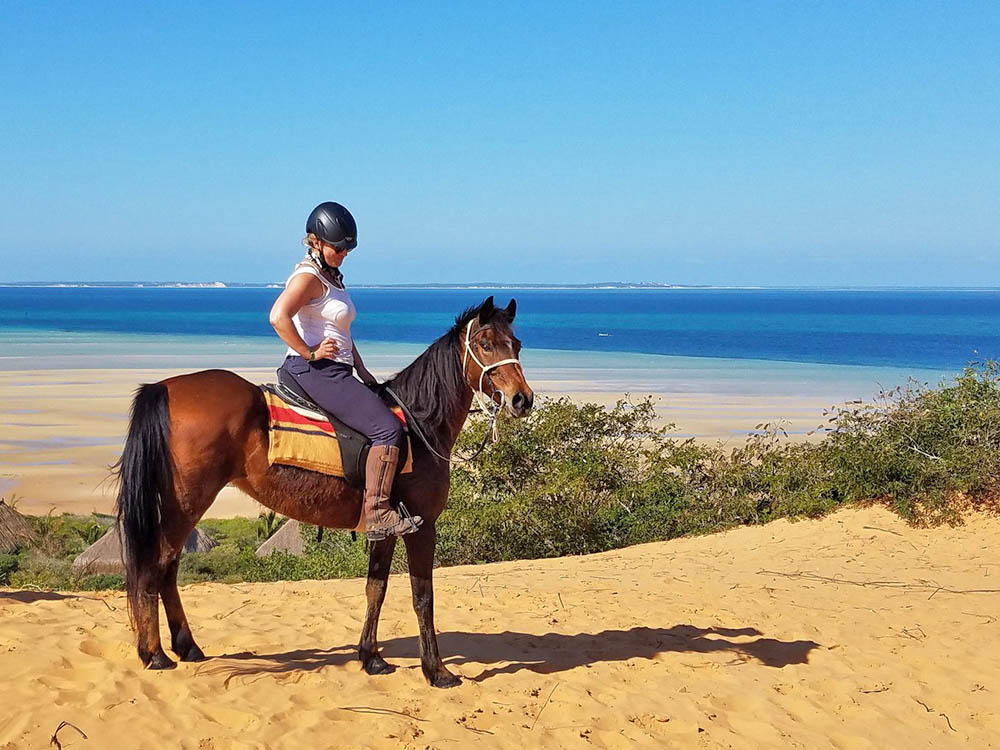 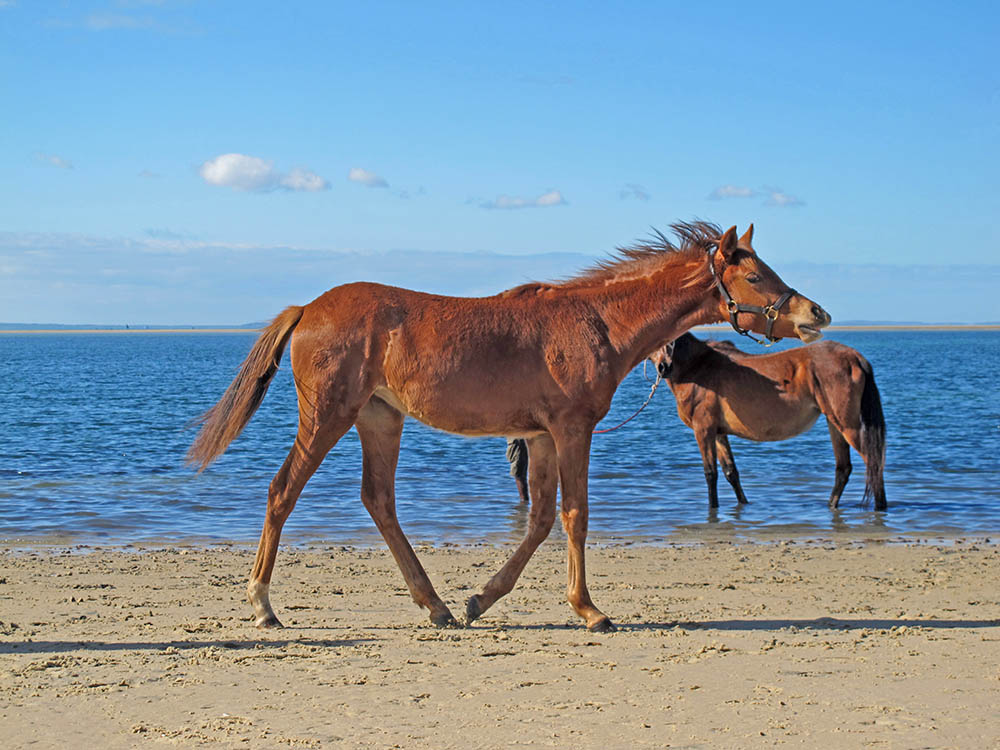 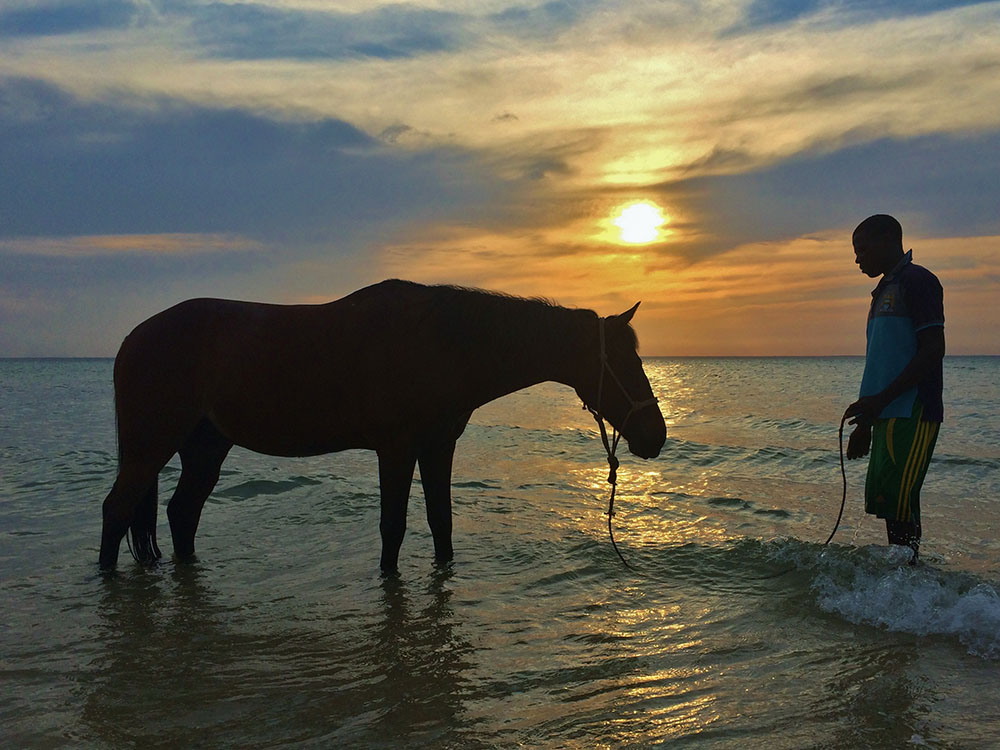 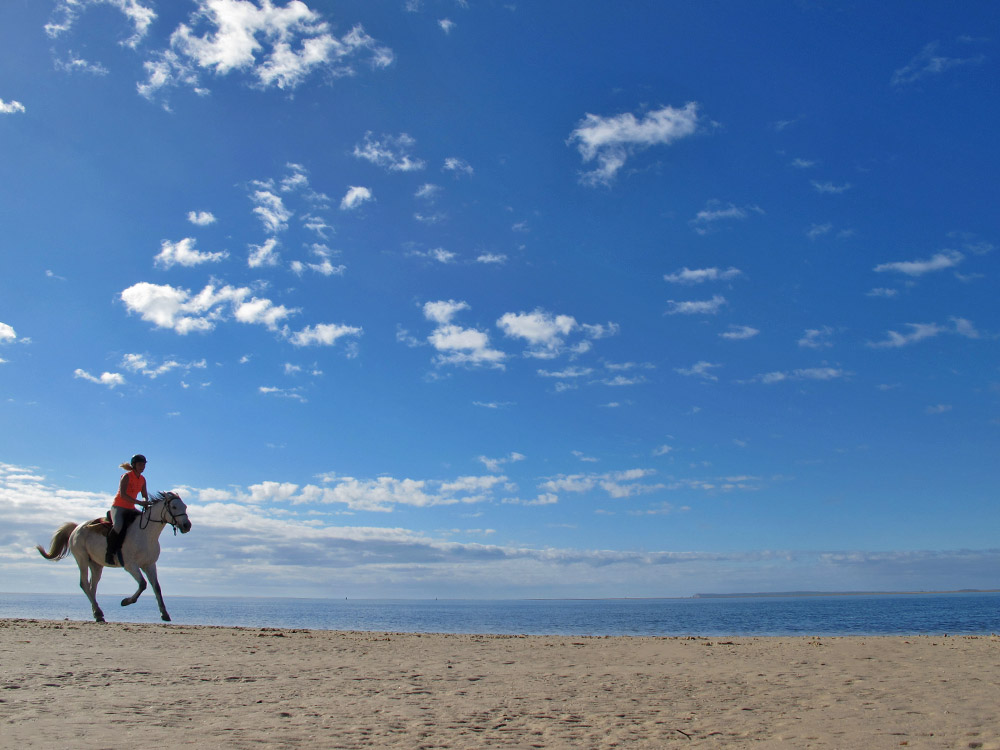 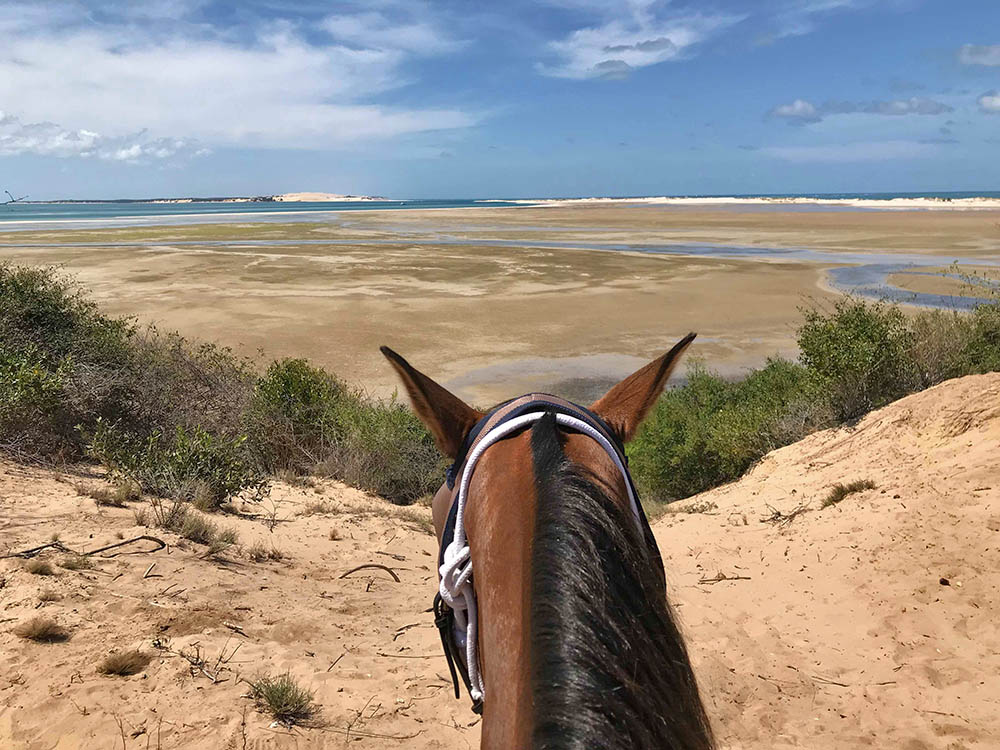 Greeting from sunny Vilankulo. Some of the most beautiful months to visit Vilankulo are April and May, it’s not too hot and the sea is so warm and inviting. The horses absolutely love it. 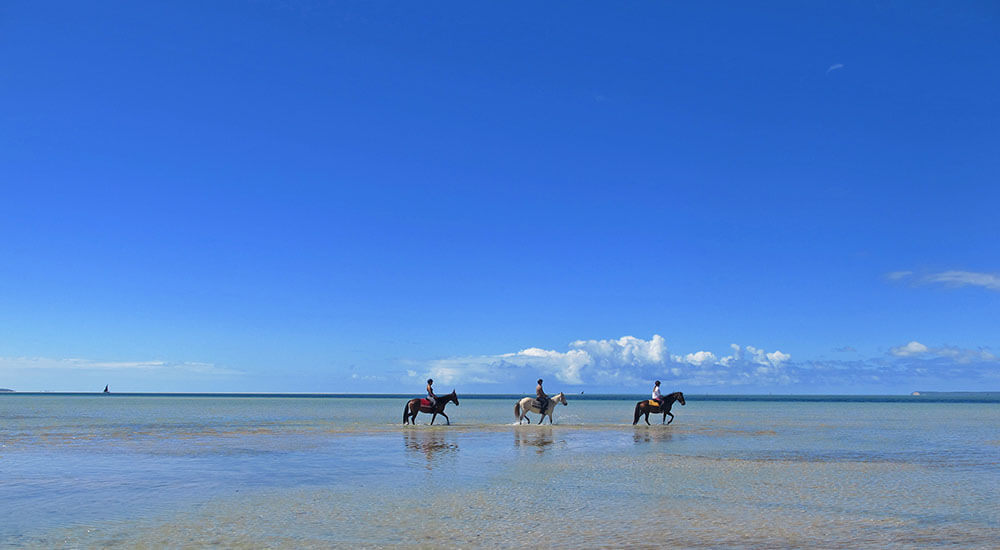 Sadly this year, due to the incredibly destructive cyclones and talks of cholera & disease on all media outlets, many embassy websites tagged Mozambique as high alert. This of course alarms tourists, many of whom were booked in to visit Vilankulo & Bazaruto Archipelago have put their holiday on standby or cancelled.

Even though we are hundreds and thousands of miles away from both cyclones it has unfortunately had a negative impact. In our case we look after 40 working families that rely on us, a downturn in riders affects our horses and the livelihoods of most people in the tourist industry. Thankfully it seems the warnings are being lifted and we hope tourists and riders will return to this idyllic little piece of paradise.

As you know Vilankulo is the gateway to the Bazaruto Archipelago and the person responsible for originally developing tourism in this beautiful part of the world was a Portuguese man called Joquim Alvez. He built his first hotel in 1949 after the Second World War in the centre of the town which is now painted Vodacom red and no longer operates as a hotel. Realising the town’s tourism potential he went on to build the famous Dona Ana Hotel named after his wife and then Paradise Island known as Santa Carolina. Paradise Island is where many keen fishermen visit to catch the big Blue Marlin. 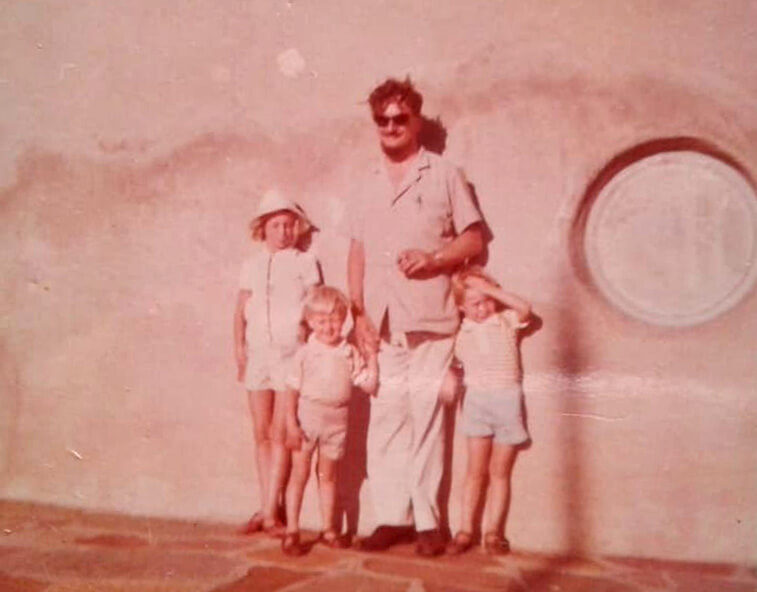 Visitors from all walks of life used to flock to the pristine shores of Mozambique in the 50’s, 60’s & 70’s. Vilankulo was especially popular with South African & Zimbabwean families during the school holidays. We were no exception and my parents would load my brothers and I in the back of our Rover 90 and we would set off to Lourenço Marques which is now known as Maputo. We would spend the night in Komatipoort before we crossed into Mozambique from the South African border. It was always so exciting driving into Mozambique as it was amazingly foreign. The language and the different money would intrigue my brothers and me and it was always such an adventure.

My father was an architect and there was nothing he loved more than travelling to Maputo as he was a great admirer of Sir Herbert Baker, an outstanding architect who designed some of the cities most majestic landmarks. We would stay at the Polana Hotel and I have so many wonderful memories of this gracious hotel. My brothers and I spent hours in the pool practising back dives while our parents drank pink gins on the terrace or had afternoon tea in the lounge. As a little girl I was entranced with the glass lift and would spend hours going up and down gazing through the glass as I went from floor to floor. My father would roam the streets of Lourenco Marques and he found the city inspirational and would often sketch an arch or an interesting column which he would apply to his own designs.

After a few days in Lourenço Marques we would pack up the car and head for Vilankulo. It was the days without smart phones or 4 wheel drive. My father would carry a chain which they would attach to the wheels if we were bogged down in the sand. We would travel on strip roads and spend the first night in Xai-Xai.

Luggage would be rearranged as my mother loved to buy those huge glass bottles of red wine with the wicker wrapped around them. This would be hoisted on the roof rack and securely tied as on a previous trip the bottle had cracked and all the wine dripped down the windscreen and father had to put on the windscreen wipers. When the wine had been drunk, the bottle would come back home and my mother would have it made into a lampshade. The journey to Vilankulo from Xai-Xai was quite a distance and my brothers and I would get bored and start to fight. When the fighting became intolerable my father would slam on brakes and tell us to get out and walk to Vilankulo. This would shut us up for a while and the journey would continue. 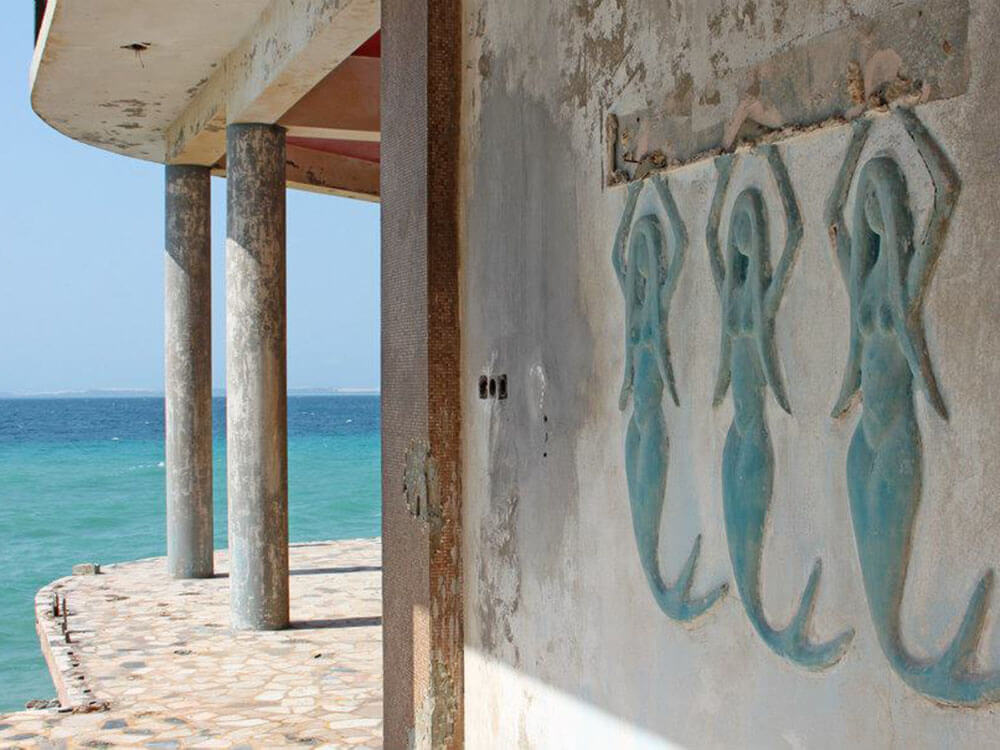 The ruins of the old hotel on Santa Carolina, commonly referred to as Paradise Island.

Once we were in Vilankulo we stayed at the Dona Anna hotel. Once released from the confines of the car we would head for the beach diving into the warm sea and our parents would head to the bar. We ran wild in Vilankulo and ended up so blistered and sunburnt we could not bear a sheet on our backs. It was the days of no sunscreen and we always forgot our hats. We would take a boat to Paradise Island and spend a few days there. My brothers and I would sit on the beach and watch in awe as the fishing boats brought in huge Marlin that were hung up, weighed and measured. Sadly it all came to an end when the civil war started in 1974. A war that raged for 16 years and a million and half Mozambicans lost their lives. The country was brought to its knees and it was only by 1995 that it slowly started to recover.

Who would have thought that Pat and I would end up here so many years later with a bunch of rescued horses due to the turmoil in our own country. We are now riding on those same beaches that I ran wild on as a little girl. Its life I suppose.

Every newsletter we like to try and to put together a few striking pictures portraying the colours of Mozambique Horse Safari. We have changed tack this week with a selection of black & whites which we hope you enjoy. 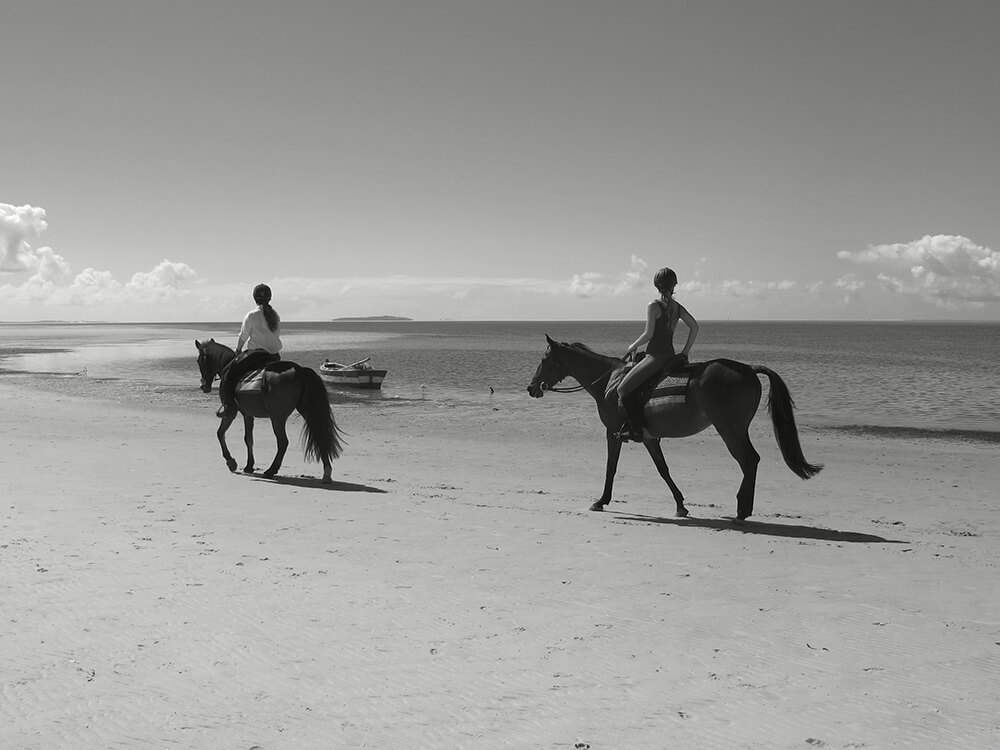 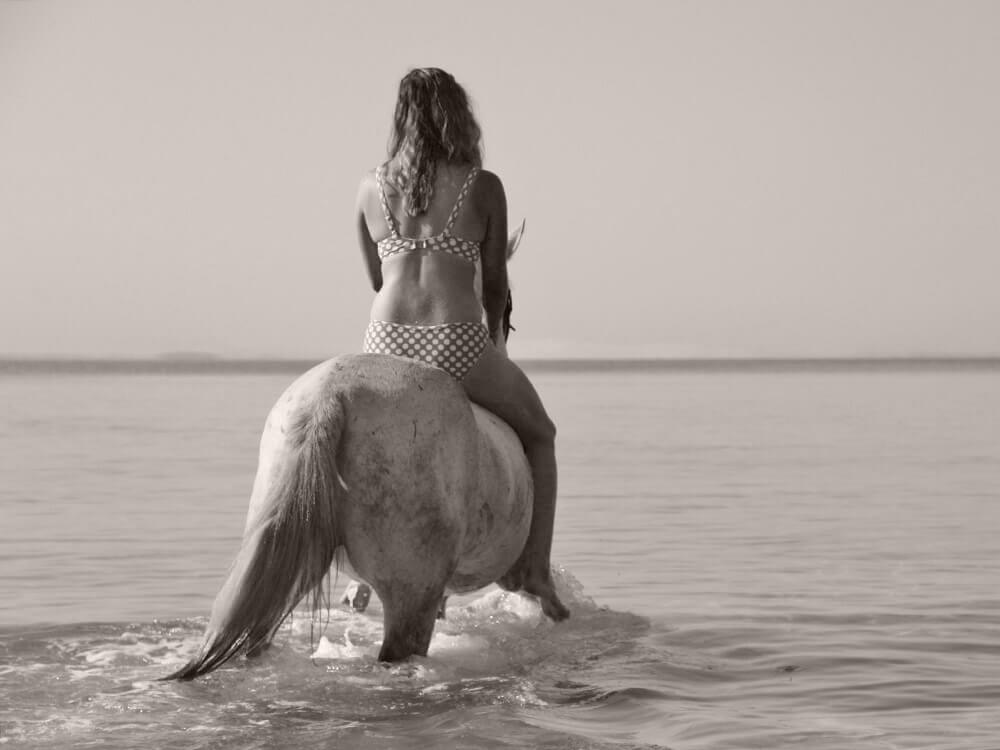 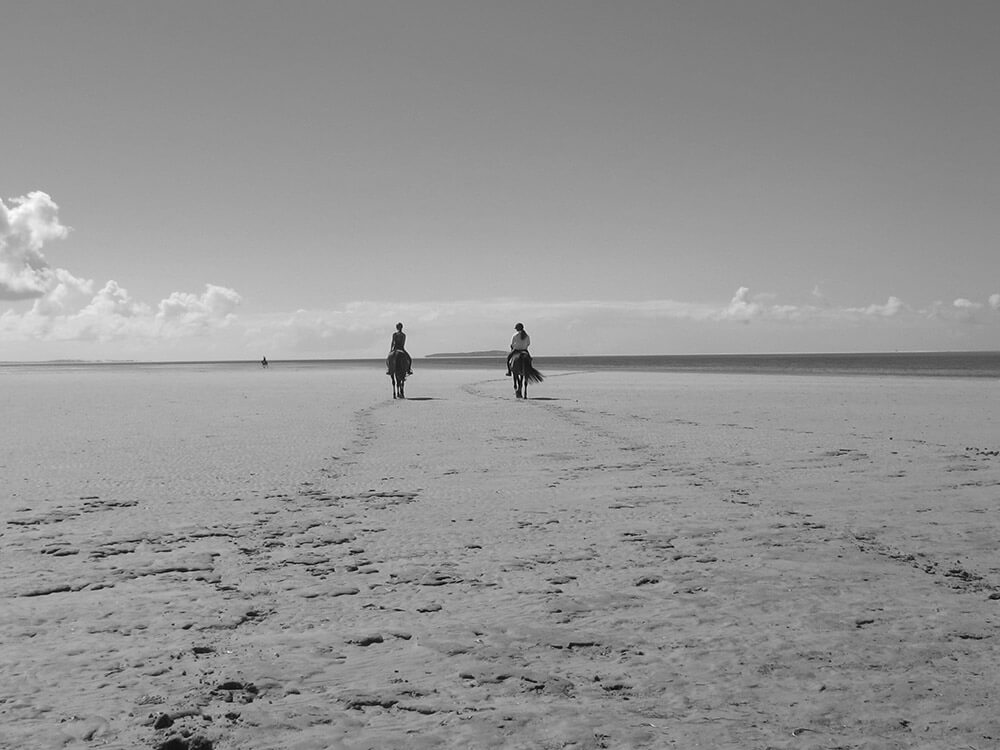 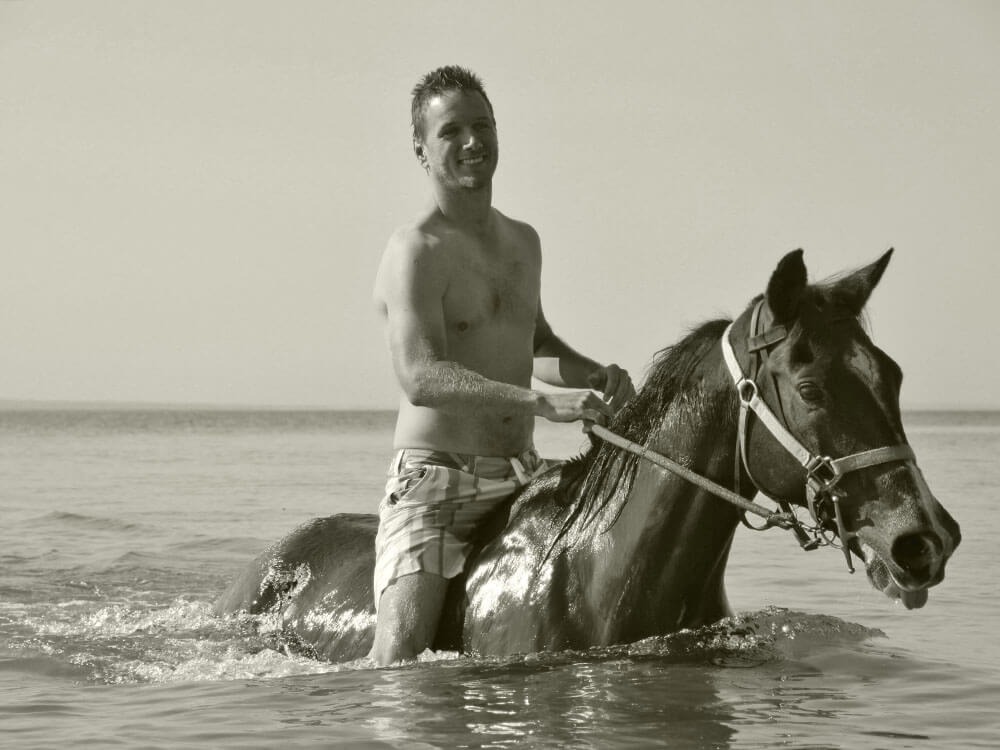 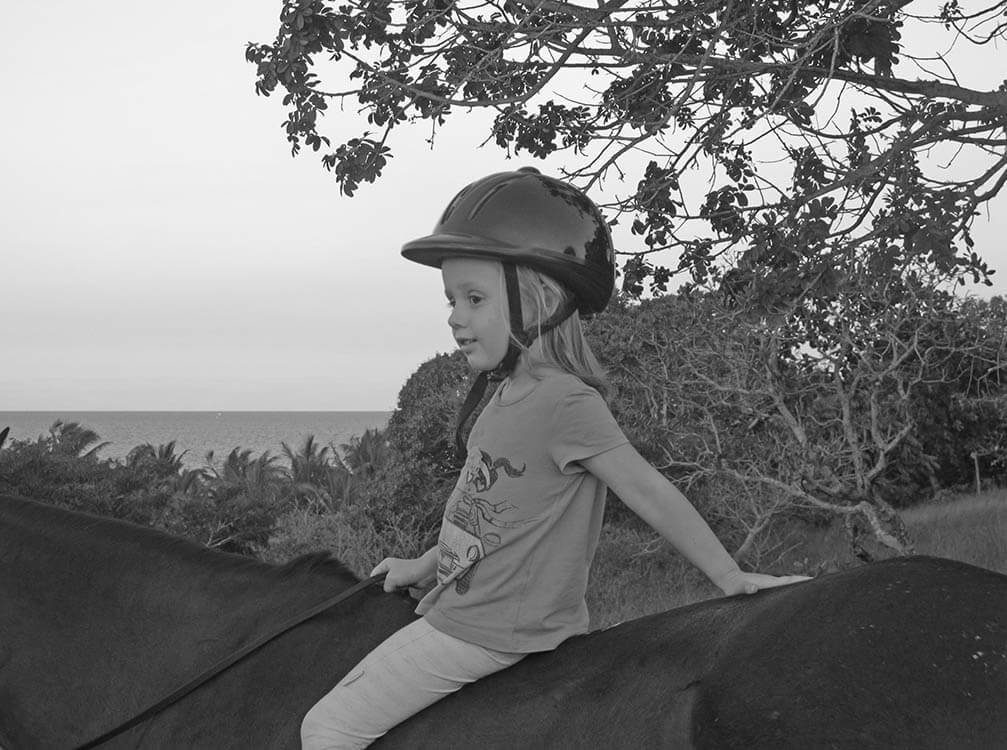 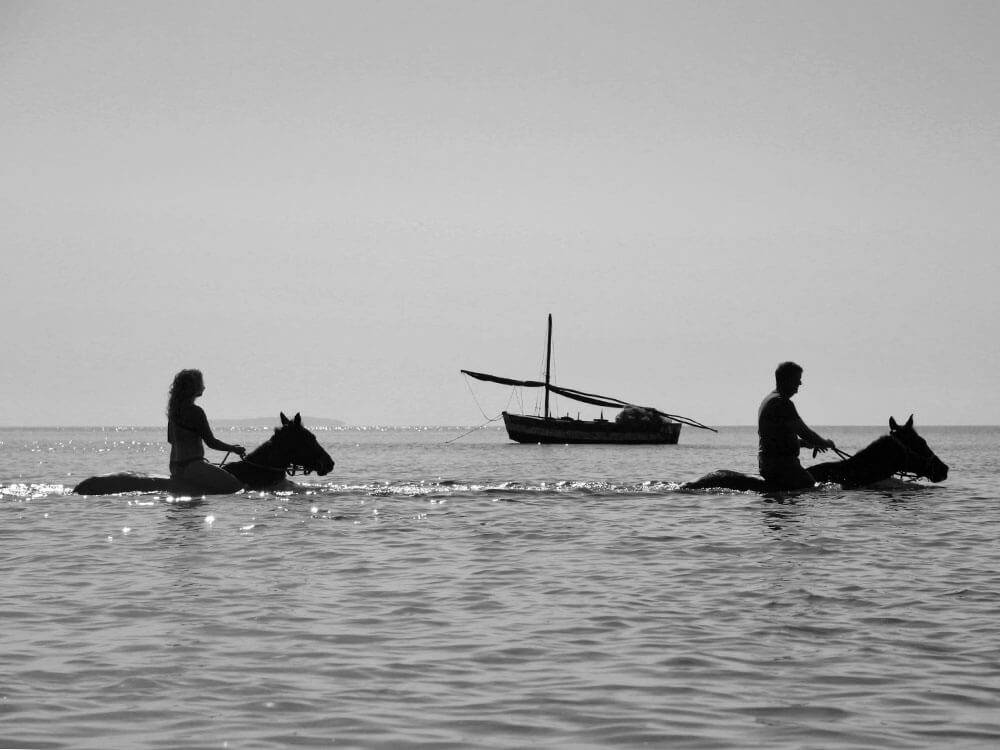 We are getting super excited for the return of the Humpback whales. Our coastline is incredibly rich in food and attracts more large sea animals than anywhere else in the world. Every year pods of Humpback whales embark on their annual migration from Antarctica to the coast of Mozambique to mate and calve in one of the lengthiest migrations in the world. From June to October, you can see these majestic marine giants along the Vilanculos coast. Watching them breach the water in a display of aerial acrobatics is truly breathtaking and something not to be missed. 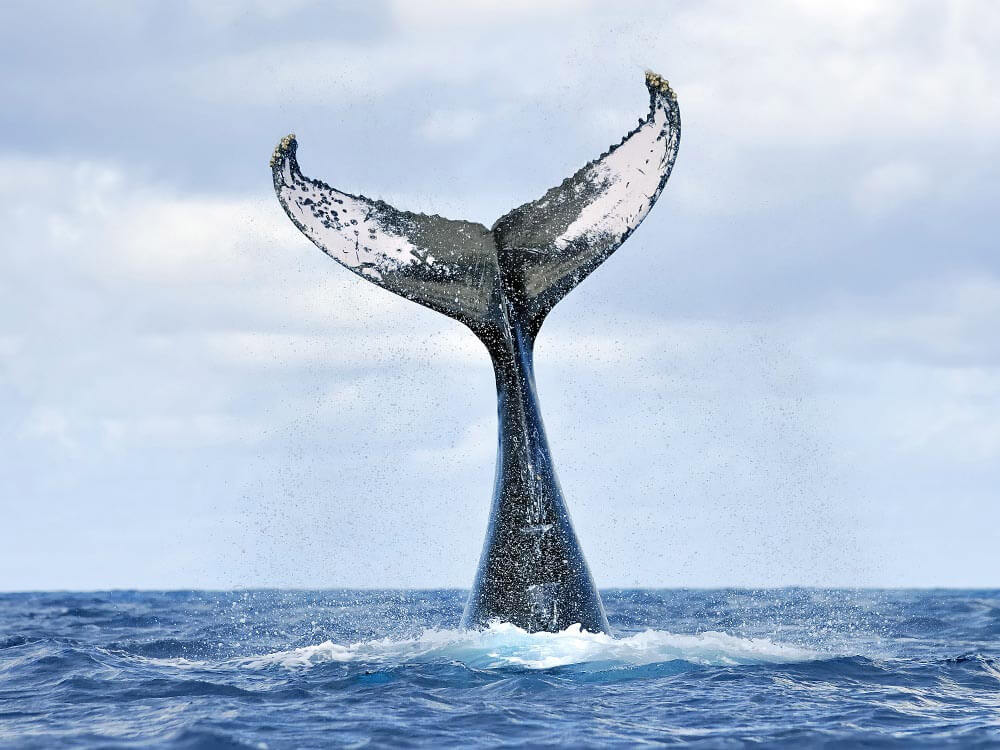 A lovely poem telling of negotiations between Mandy and the local chief after Brutus had escaped from the stables and eaten part of a maize crop. 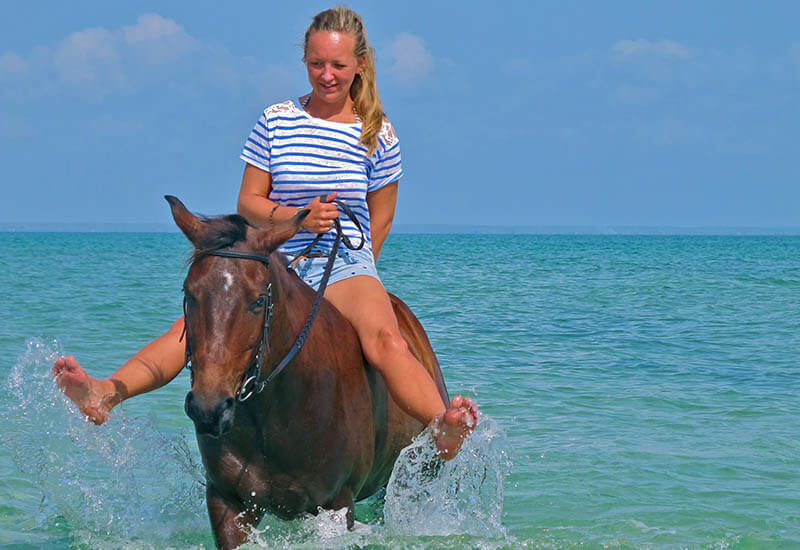 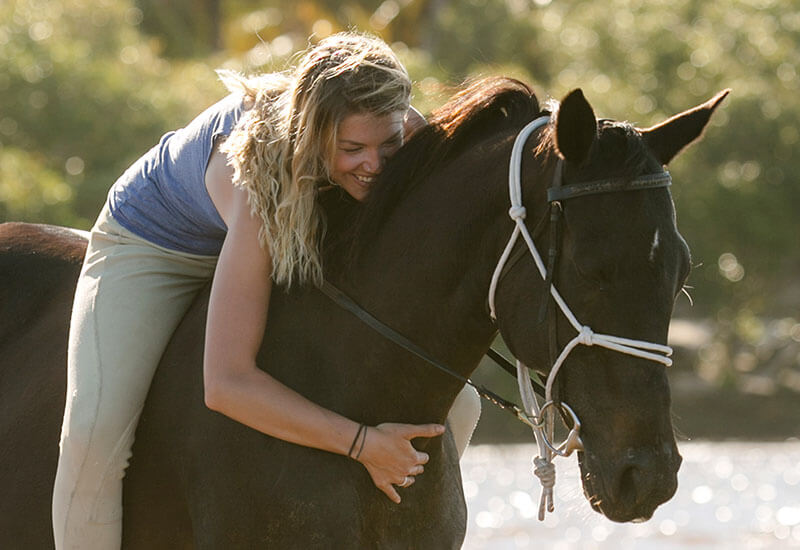 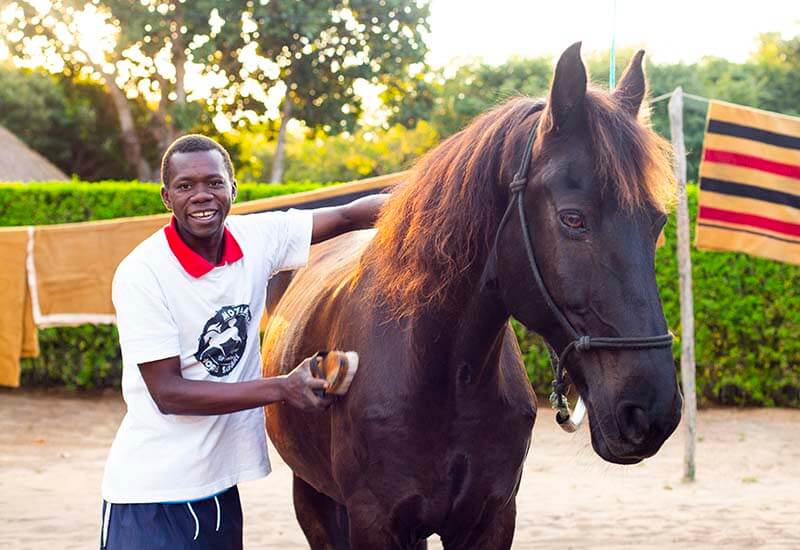 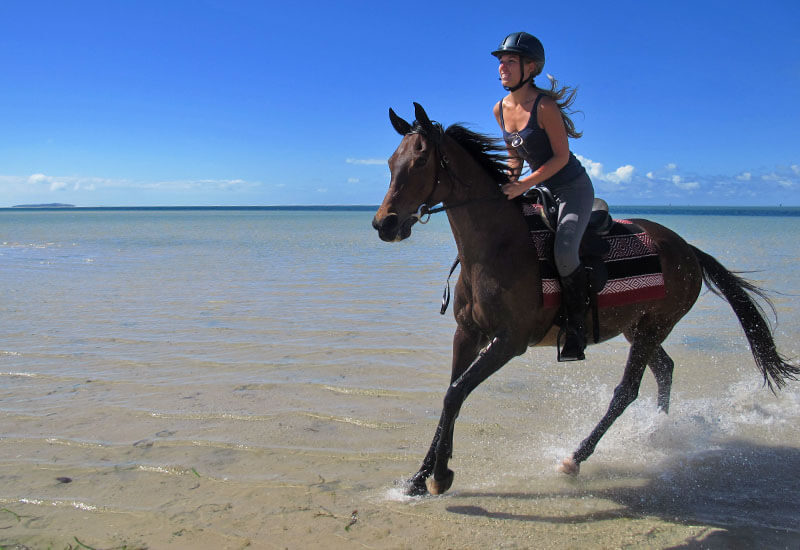 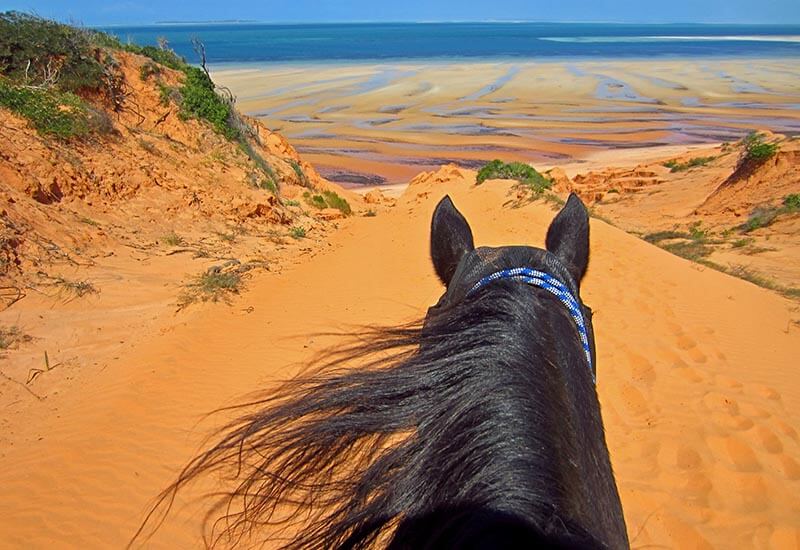 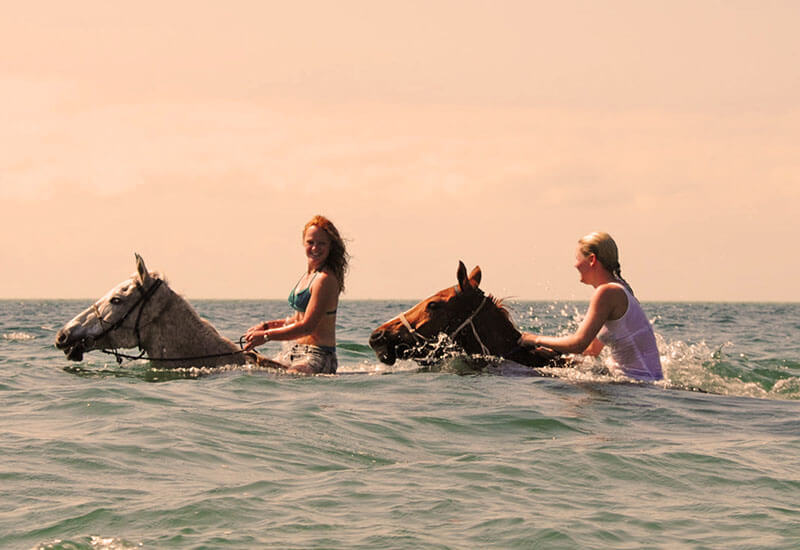 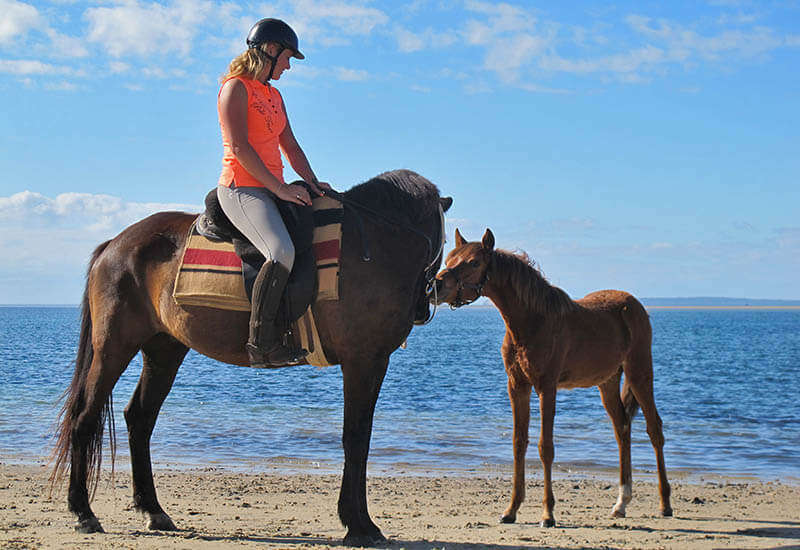 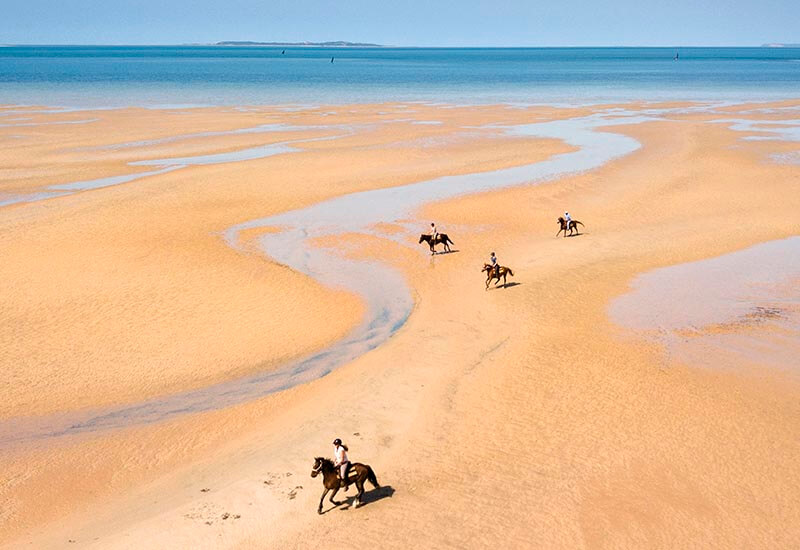 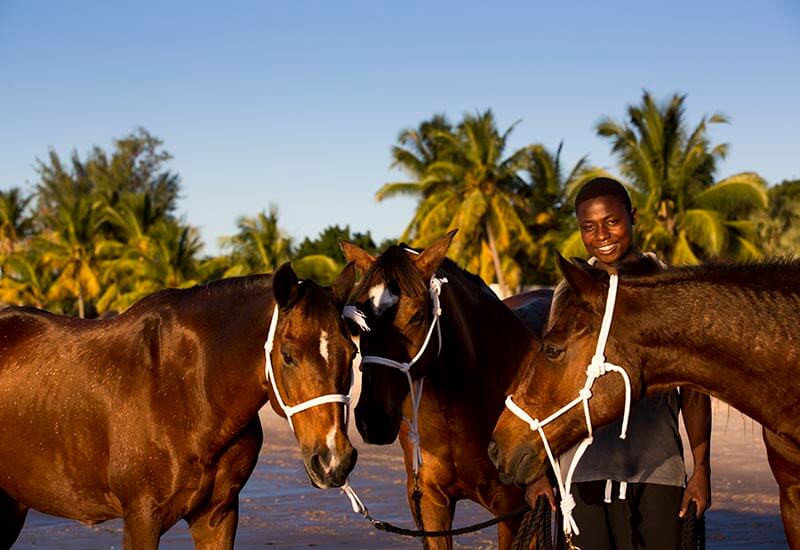 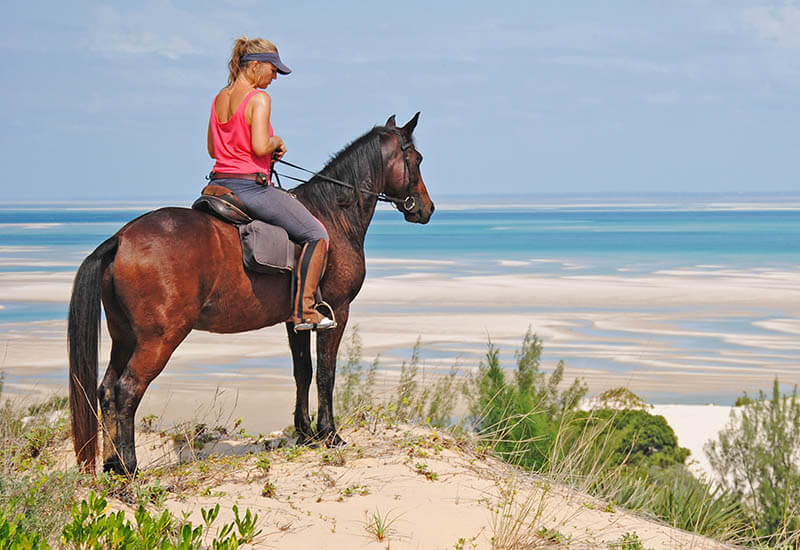